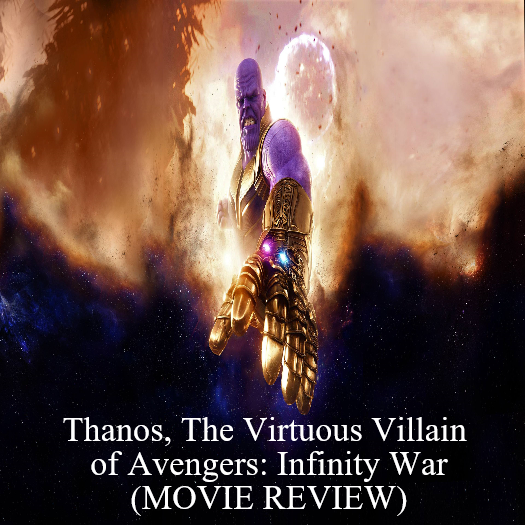 The Phoenix is an iconic symbol of restoration and resurrection.  It purges itself of impurities, the things which have tainted its purpose. Through self-induced immolation, it destroys impurities.  Through purification-by-fire, ashes become the pristine tools the Phoenix exhumes to press forward and persist. Reclaim. Renew. Reinvigorate. Perhaps this trifecta of restoration is Thanos’ goal. Perhaps the case can be made that the titanic virtuoso of Marvel Studio’s newest release Avengers: Infinity War harbors not only villainy but also virtue.

Induced immolation is not the most palatable means to transformation.  It exacts compliance and great cost. From Thanos’ perspective, civilizations do not know what is best for themselves, his proof being their demonstrative succumbing to the self-inflicted burdens of over-population and lack of resources. Perhaps from his perspective his actions are benevolent. However, whether it’s the gilded goliaths of Asgard or the peaceful inhabitants of Zen-Whoberi, his targeted purge is not by invitation.

Thanos’ mathematical imposition is executed by The Black Order, and as articulated by the docile-voiced yet merciless Ebony Maw, those who submit to his purge will be the better for it. Thanos is judge and jury, while his black-hearted “children” are the executioners of his will.  The Infinity stones augment the myriad means Thanos can inflict the purging massacre and its scale. True to form, Thanos wields his agenda relentlessly and ruthlessly.

Thanos’ agenda exacts a blood-price.  Despite the spectral Red Skull’s warning, Thanos tearfully sacrifices the life of supplanted but beloved adopted daughter Gamora. A huge price to pay for the Infinity Soul Stone but paid nonetheless. Consequently, nothing about Thanos seems redeemable by this deplorable act and others.

By the movie’s end, perhaps such amassed power is not the target of his affection and actions.

What exactly is Thanos’ motivation for imposing such correction, to extol while extort such a toll? One would think, simply, it is to be master of the universe, to wield indomitable authority over all. There is clear evidence this is his self-imposed charge throughout the nearly three-hour movie.

But maybe, just maybe, Thanos melds virtue and venom in pursuit of a loftier goal.

While historical precedents and narrative convention lead us to think that a villain pursues ultimate power for self-promotion and gain, and therefore unredeemable, the final scenes of the movie (after the Wakanda battle and retrieval of the Mind Stone from The Vision) leads us to think the hardened heart and the unyielding power of Thanos’ gauntlet are for something more sentimental. Perhaps the goal is the restoration of his own hurt heart, his yearning for his homeland. When Thanos surveys the expanse of new corpses and smoldering cinders, the ravaging purge yields a homeland he can smile upon, where he can dwell again.

Perhaps Thanos’ rapturous destruction and carnage can be seen as a tool of a larger universe’s self-correction, also be perceived as a means for restoring, renewing, even reconciling the Avengers and Guardians of the Galaxy unto themselves. They have sustained massive casualties to their friendships and lives constantly combatting governmental nemeses, arch rivals, civil wars between friend and personal demons.  Yet the threat of Thanos is alarming enough to them all to return from their personal retreats and corners of the world to assemble. The vile, villainous Thanos provides enough of a threat to them all (and life everywhere) that they are willing to put personal differences aside and amass the wealth of their powers to fight for something bigger than squabbles, principles, and bruised egos. Having a common enemy will do that.

Yet the “virtue” that Thanos instigates out of the Avengers and Guardians comes with a price. In the over 14 million possible outcomes Dr. Strange tells Iron Man he could see in foraging the future, there is only one outcome the Avengers can win. At the end of the movie, it means even several of them are returned to ashes. A vicious toll exacted by a virtuous villain?

Please share your responses, reactions and ideas in the space provided below. Thanks so much. Cancel reply

Tanya Manning-Yarde, Ph.D., is a freelance writer and former educator from New York City. A graduate of Rutgers University and University at Albany, she recently worked as a copy editor and contributing writer for Bronze Magazine. She is a freelance blogger for the annual Montclair Film Festival in Montclair, NJ as well as blogger for personal website (tmychronicles.wordpress.com). Prior to pursuing a career as a writer, she was a high school English/Language Arts teacher, Assistant Professor, Instructional Coach and an educational consultant. Her poems have been published by Literary Mama, Memoryhouse and Random Sample Review. She published her first book, Every Watering Word, through Wasteland Press. Inspired by her dissertation titled Literacy as Contextualized Action and homeschooling her two sons until school age, she is drafting a book on literacy and homeschooling.

I was reminiscing about our 10th wedding anniversary and came across this post from Montclair Brewery! Denise and Leopold, what a blessing to see your business prospering. You're a phenomenal husband and wife team, #ironsharpensiron. And thank you for being our friends across miles and time. And THANK YOU for making our anniversary so special. Wishing you continued prosperity.
%d bloggers like this: