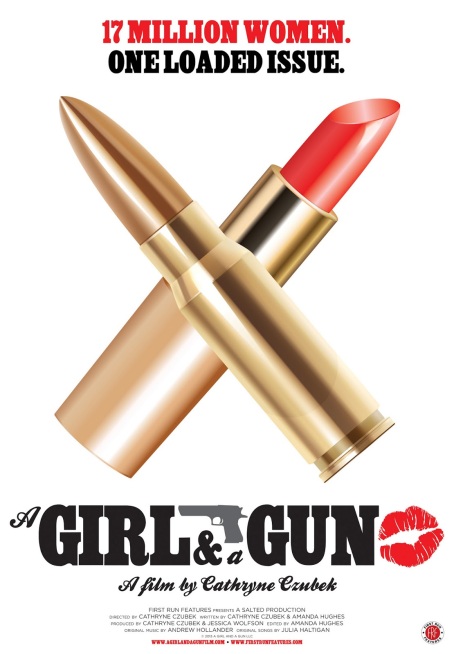 “A Girl and a Gun” instigates a discomfiting albeit necessary conversation about firearms, illuminating the fantasies, frights and fascination associated with them.  Filmmaker Cathryne Czubek gains access to the chambers (literally and figuratively) of women’s personal experiences with firearms, and with surgical precision unfolds their revelations.  Intersecting issues around gender, identity, history, politics, and culture, the movie yields an unabashed and uncompromised examination of the impact of a firearm culture.

While the nation struggles with a politically imposed polarization of the “gun argument”– you are either for or against guns—the filmmaker craftily dispels this artificial chasm. Czubek’s anthology illustrates that no dichotomous argument can be made. Interviews of participants nationwide, from various walks of life, divulge a gamut of experiences with firearms, with multifarious perspectives emanating.  Being the one to kill in the name of self-defense, the recipient of a paralyzing bullet, the inheritor of a family hunting tradition, or felon misinformed by gun laws, Czubek introduces us to the “true” world of firearms.  Her movie reveals a world where outcomes and outlooks cannot be easily codified.   A world where perspectives do not ping pong from pro to con, but are marbled and striated, ever-swirling with conjecture, introspection, and conviction.

In one segment, Czubek shrewdly inspects the correlation imposed by media between firearms and gender. It explores the prolific albeit strange eroticism of women with guns within film, television, and advertisement.  Guns are correlated with empowering women, as vivified in the portrayals of characters like Sarah Conner in “The Terminator,” and Ripley in the “Aliens” movie franchise. Interviewees analyze “The Sabrina Pose,” the nickname given to the gun-toting, taut-thigh-holding stance portrayed by Sabrina Duncan from the iconic girl-power “Charlie’s Angels” show, illustrating how it conjures an unusual connection between a woman’s sense of self-assuredness and empowerment with the fetishizing of a woman holding a gun.  Perversely, bikini-clad models shooting high-power assault rifles are utilized in propaganda advertisements to promote the phallic prowess of such weapons.  In another twist, the film illuminates upon the typecasting and stereotyping of women as fashion plates even when arming themselves.  Footage from a gun show displays decorative gun handles and camouflage-decorated lipstick holders as further evidence of how notions of femininity and firearms are outlandishly fused together. 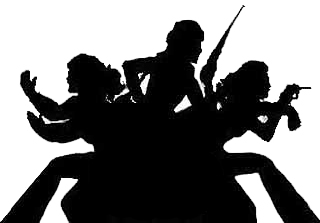 Yet in a later segment, Rosemarie Weber, a Marine sent to Iraq, brings a unique take on the real consequences of having legitimized access to firearms.  Weber shares how “It was scary to see people you knew change” because they internalized that such access imbued them with a ” sense of power.” Czubek also captures an ironic feminization and gendered objectification of weapons, even by women. Weber makes an interesting comment about her affiliation and affinity toward guns, calling the ones she own her “Barbies.”

Czubek gathers several participants’ intimate accounts of family traditions, allowing them to unfold through their own words how such inheritances shaped their orientations toward firearms.  Emily Blount, a renowned medal-winning skeet shooter, learned to shoot from hunting with her family, sharing that skeet shooting with her father (who is also her coach) is “a way to spend time with my dad.” The movie delves deeper, exploring connections between traditions, notions of motherhood and firearms.  A mother from Lawrenceburg, TN, details the deep entrenchment of hunting within her family and the continuance of such traditions with her own sons despite tragedy. Margit Sawdey, a mother of sons living in New York City, separates her use of guns from her home and sons.  Literally.  Familial bonds that surface from shared experiences with firearms receive careful attention from Czubek, contributing to a deeper conversation that should be had after viewing the movie around the impact of social and cultural inheritance.

While exploring ways in which women and their families bond around guns, other vignettes and interviews revolve around the ways in which guns break them.  Stephanie Alexander divulges the impetus for becoming a victim rights activist. After a tragic event in her life, she retaliates by adding herself to a campaign to end gun violence. She shares “Getting out and making a difference gave me the medicine of healing.”  Aiesha Johnson reveals the changes to her life and family after being paralyzed by a stray bullet.  Karen Copeland recounts how misinformation about gun ownership and misplaced anger resulted in her incarceration.

Czubek surfaces the voices and experiences of women who have had to resort to the use of deadly force. She includes their narratives as complications of political arguments of firearms as tools of protection and empowerment.   When asked of how she came to like guns, Robin Natanel, a Tai Chi instructor in Holliston, MA, recounts a pivotal life experience where “I never had my mortality in my face like that before.”  While on the phone with 911 during the break-in of her home, Sara McKinley, a widowed resident of Blanchard, Oklahoma, makes a calculated decision to protect herself and her newborn son against an intruder.  Consequently, she confesses that she now walks around with a gun in hand at all times, even when holding her baby. Violet Blue, a blogger and TED speaker, shared interesting points about her personal gun ownership and being a woman in larger society. “I just love this gun so much.” Yet, “You move through this world as a target . . . those women who aren’t live in a privileged world.”  Deb Ferns, co-founder of Babes with Bullets, organizes “lady gun camps” nationwide.  She shares that for herself that “going to the range empowered me.”

Captured from the mouths of stakeholders, Czubek allows candor and contradictions to collide, vivifying the unevenness of how firearm use is portrayed when compared to actual experiences.   “A Girl and a Gun” surfaces what is problematic behind the enjoyment and execution of the Second Amendment.  The takeaway is that such a right, and its exercising, are both nuanced. There can be myriad historic, social, cultural reasons why a woman does or does not use a gun, having little to do with thrusting a specific political argument and agenda forward.

Thanks to Czubek, we, as a nation, we are left with much to examine and discuss. 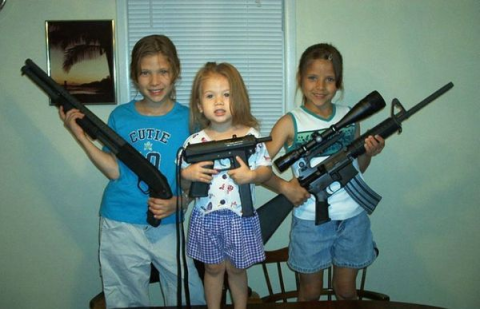 After the showing, the audience asked Czubek about the impetus behind creating the film and poignant questions about its implications.   One audience member inquired, “Why did you feel you had to make this examination of women and guns?” Czubek, who is also a photographer, shared that in 2001 she was on assignment photographing young girls in a gun club. After the assignment, she was so intrigued by these young women that when she returned to NYC she began attending monthly meetings of a women’s gun club in Chelsea that then spawned the idea for the movie.  Another viewer inquired how Czubek went about conceptualizing the film.  Czubek conversed how she wanted to learn about relationships between women and guns from a multiplicity of angles, that “A gun could symbolize different things for different women.” As well, she wanted to deeply explore the contemporary issues that arose from such relationships.  Another audience member queried Czubek about why she included only one incarcerated participant within the film.  Czubek explained she found Karen through the website writeaprisoner.com, and her particular story resonated. Czubek further expounded that Karen was the most honest among potential incarcerated participants considered, as others demonstrated other agendas. Then Czubek was asked how she was changed throughout the making of the film. She explained how she learned that “there are complex complicated reasons” extending beyond the dichotomous argument typically represented within our culture and society. Another audience member inquired, “How does it make you feel having shot a gun?” Czubek shot a gun for the first time during her assignment in photographing the young girls. She intimated that “it felt like a rite of passage.” Another audience member asked what the filmmaker learned about the ways women in the film incorporate guns within their lives. Examples she shared were that guns were positioned as sport, protection, and artifacts of war.  She found they were in constant negotiation between their roles (for example, as mother, girlfriend), as well as dispositions (vulnerability, competitiveness, empowerment). Finally, an audience member inquired how long it took to make the film, as well as the challenges and hurdles encountered. “A Girl and a Gun” took 8 years to make, and after initially deciding to shrink to film to highlight just a few participants, Czubek felt that the larger narrative was sacrificed, and thus expanded again to become a multi-character story.

Please share your responses, reactions and ideas in the space provided below. Thanks so much. Cancel reply

Tanya Manning-Yarde, Ph.D., is a freelance writer and former educator from New York City. A graduate of Rutgers University and University at Albany, she recently worked as a copy editor and contributing writer for Bronze Magazine. She is a freelance blogger for the annual Montclair Film Festival in Montclair, NJ as well as blogger for personal website (tmychronicles.wordpress.com). Prior to pursuing a career as a writer, she was a high school English/Language Arts teacher, Assistant Professor, Instructional Coach and an educational consultant. Her poems have been published by Literary Mama, Memoryhouse and Random Sample Review. She published her first book, Every Watering Word, through Wasteland Press. Inspired by her dissertation titled Literacy as Contextualized Action and homeschooling her two sons until school age, she is drafting a book on literacy and homeschooling.